License to Freedom in Shondaland.com – “How getting my UK driver’s license gave me a renewed sense of freedom as a single mum raising kids in a country far away from home.”

The Strange Pregnancy Fact That Helped Me Mourn My Fiancé’s Death in New York Magazine’s The Cut – “His voice is no longer in my head and I’ve long lost the memory of his smell, but Sean and his death have slowly become a part of who I am.”

The Life Less Ordinary in Lenny Letter – “A world traveler all her life, this single mom wishes she could trade her globe-trotting freedoms for the comforts of home — but she’s stuck halfway across the world.”

When Every Relationship is an Accidental Love Triangle in New York Magazine’s The Cut – “My fiancé died 15 years ago. But he’s still forever, and never, with me.”

My Fiancé Died, But his Backpack Still Haunts Me in GoodHousekeeping.com – “I watched him go within minutes after a box jellyfish pierced his leg. Now an ambush sight or sound reminds me: He should be here.”

Help Wanted, At Last in Real Simple – “Bolstered by the pride and folly of youth, she conducted her life without the input or aid of others. Until the day a life-altering tragedy made her realize that sometimes the person who can’t ask for help is the one who needs it most.”

Focus in The Lonely Planet Travel Anthology: True Stories from the World’s Best Writers – “As you travel through these pages, may your mind be widened, your spirit enlivened, and your own path illuminated by these worldly word-journeys.” —Don George 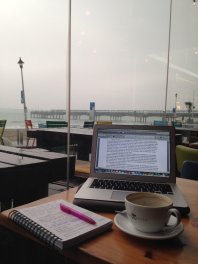 Book Notes at Largehearted Boy – “We met backpacking through Western Europe, where Sean traveled with a Discman and tinny, portable travel speakers. We listened to music all the time together, especially in bed. We made each other mix tapes while we were apart, that we sent in the post. And after he died, I found meaning in the lyrics of almost every song.”

Under the Influence #2 at ENTROPY – “Another writer recommended Elizabeth McCracken’s An Exact Replica of a Figment of My Imagination when I was writing my own memoir. It begins with a suggestion that she “should write a book about the lighter side of losing a child. (This is not that book.)” What follows taught me that books can be deeply sad and profoundly beautiful at the same time.”

There is a Light That Never Goes Out in ELLE Australia – “Stricken with grief after the death of her fiancé, Shannon Leone Fowler fled alone to the farthest reaches of the world to confront the past and finally move forward.”

Sea Glass: a marine biologist’s journey with the ocean through love and loss in Catamaran (October issue) – “For twenty years, I worked and planned and dreamed and studied to be a marine biologist. All of this, I did for love. And in some irrational corner of my young and privileged heart, I expected the ocean to love me in return.”